Here’s just some of the feedback from our radiology staff

“As soon as the children walk in, they are more at ease,” she said. “The rooms are less clinical.”

Jenien added: “We have found children to be less fidgety now during their X-rays, which in turn means we can do the X-rays quicker. We’re finding that we have fewer repeat X-rays, which is much safer because it means less radiation.”

Radiographer Imran Ul-Haq (pictured below, on the right) said: “It was quite daunting for children coming in for an X-ray before. They were often scared because it was dark and not very welcoming. But it is now so refreshing and the pictures distract the children. It means we can take good images much easier than before. We also have lots of distraction toys, which we purchased as part of the refurbishment.

“The parents are always very pleasantly surprised when they see the room so well kitted out for children. It’s also made our job much easier. Staff are much happier since the improvements. It shows we are valued.” 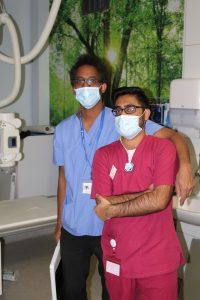 Samantha Shepherd, MR advanced practitioner, said the Relax and View (pictured below) now fitted to the MRI machine, was making a “massive difference to the patient experience.”

She said that people who had previously been unable to tolerate a scan could now undertake the procedure due to the distraction.

“Children much younger than expected in the past are now having scans without general anaesthetic,” she said. This means children can be diagnosed much quicker without the wait for a general anaesthetic.  “We’ve had really positive comments from parents,” she added.

She said: "It has been a really valuable space to use to allow our youngest patients (0-6 months old) to be prepared for their MRI scans. "This space allows a quiet and calm environment for the babies to be fed and changed and ‘snuggled’ to sleep ready for the scan. This preparation is vital as if we are not successful in getting the children into a deep enough sleep to tolerate the scan then the alternative is far worse (i.ee no scan or needing a general anaesthetic).

"We also use this room for the parents to wait in who have accompanied an older child having a general anaesthetic for the MRI scan.

"It can be quite distressing for a parent to see their child be ‘put to sleep’ and even more so when they then have to leave their child in our care while they have the scan.

"As the snuggle room is close to MRI the parents seem to feel happier knowing that we are allowing them to stay close by and they also benefit from the privacy and more comforting surroundings that the snuggle room offers (prior to this the parents would have been asked to wait in a waiting room). "This has been especially beneficial during the pandemic when parents are now asked to accompany the child alone (i.e. only one parent is allowed in the hospital with the patient) and so parents are going through this distressing time without any support from other family. It has been even more important that they have a pleasant place to wait.

One particular example that comes to mind, a child was attending for a scan under GA with their mum and after the child had been anaesthetised and I was escorting the mum out to wait she began to have a panic attack. I was able to quickly escort her in a wheelchair to the snuggle room and stay with her in that quieter, calmer environment. We made her a drink and were able to comfort her while the panic subsided. Without that room I wouldn’t have had a private space to be able to care for her and maintain as much of her dignity as we did.

"Staff in MRI also occasionally use the room to maintain patient confidentiality when we sometimes have to ask quite personal questions as part of our safety screening process for MRI. Similarly if we need to gain consent for a procedure (i.e. an MR guided breast biopsy or an MR during pregnancy) then consent should always be sought away from the room that the procedure will take place in and again this room has proved to be a valuable space to have those discussions."

Leah Richardson, CBU Lead Radiographer, summed up the feeling among staff when she said: “The radiographers feel proud bringing patients into the rooms to complete their examinations.”