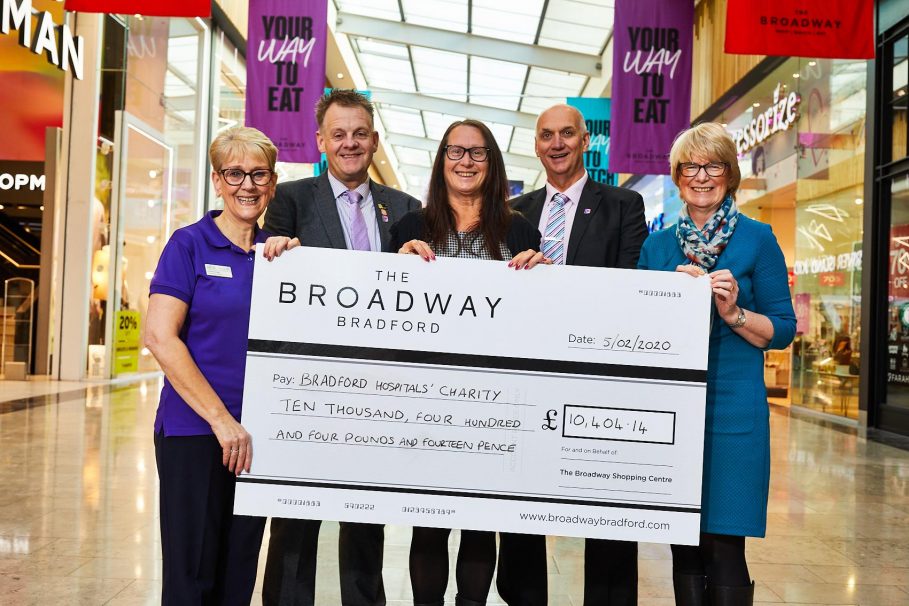 The Broadway, Bradford has announced its 2019 fundraising total which will be donated to its charity partner, Bradford Hospitals’ Charity. Through a combination of staff fundraising activities and community contributions via events in the Centre, a total of £10,045 was raised.

Money was raised for the Bradford-based NHS charity through a number of initiatives including the hugely successful Giving Tree in the Centre during the Eid Celebration Weekend and at Christmas, a gift wrapping service and toy donation. Plus, all fees paid by Channel 5 to film Shop Smart Save Money in the Centre and from the BBC during the We Are Bradford week were donated.

Hayley Collis, Head of Fundraising at Bradford Hospitals’ Charity, commented: “We’d like to say thank you to The Broadway and all the customers who have donated to our charity over the past four years. All money raised this past year will go to our ‘Rays a Smile’ appeal, which aims to make the radiology services at Bradford Royal Infirmary and St Luke’s Hospital more child friendly.

“Every single year, The Broadway has smashed its fundraising target and supported the charity in any way it can, either by hosting events or donating items. As a small NHS charity, this support has been invaluable.”

Since 2016 The Broadway has raised over £40,000 for Bradford Hospitals’ Charity. The funds raised enable the continued provision of specialist care to families across Bradford through the purchase of state of the art equipment, continued support for the staff who work at the Teaching Hospitals and regular upgrades to the facilities available.

Ian Ward, General Manager at The Broadway, added: “We’re so proud of the funds we’ve raised to support such a deserving charity. The work Bradford Hospitals’ Charity does benefits a huge number of people across Bradford and the surrounding area.

“It’s been a fantastic experience planning and hosting numerous fundraising events over the past few years. We urge everyone to get involved as much as possible and help us support charities which play such an integral role in ensuring our safety, health and happiness. ”

Press release courtesy of Lucky North, issued on behalf of The Broadway, Bradford.